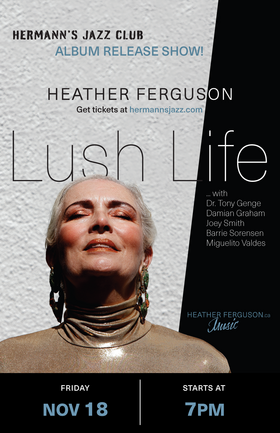 Fri. November 18th 7:00 - 9:00 doors at 5:30 (All Ages)
Livestream + In Person $30 advance / $35 door including fees/tax  Buy Tickets Online
>> Purchase In-Person Tickets
>> Donate to Support the livestream
Called a “jazz sensation” by one writer, with another calling
Heather Ferguson’s music, “lush, expertly performed, with an
engaging setlist and... she will fill the room with her silky-smooth
notes”. In her new album titled Lush Life, Heather pays homage to great songs of the 20th century that still resonate with audiences’ decades after they hit the charts.

With Heather and bringing stellar performances themselves are some of Victoria’s most accomplished musicians – Dr. Tony Genge Joey Smith, Damian Graham and great soloists, Barrie Sorensen and Miguelito Valdes.

This performance at Hermann’s Jazz Club is the long-awaited album release party where Heather unleashes the powerful vocal control that brings emotion and storytelling to every song. A dynamic and consummate performer with a smouldering sound, get tickets at the link below and visit heatherferguson.ca to sign up for the mailing list and join a growing circle of
fans.
© 2022 Arts On View Society