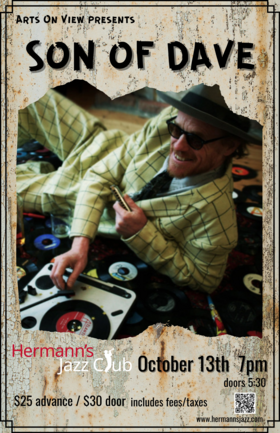 Thu. October 13th 7:00 - 9:30 doors at 5:30 (All Ages)
Livestream + In Person $25 advance / $30 door including fees/tax  Buy Tickets Online
>> Purchase In-Person Tickets
>> Donate to Support the livestream
Internationally renowned maverick bluesman. 1400 concerts across 5 continents. The first to combine beatbox & blues harmonica and whip it into a one man show that's appeared on major TV networks in UK and France, had recordings synced in Breaking Bad, a Robin Williams film and many more. Played in support of huge acts on big stages across Europe (Supergrass, Sleaford Mods, UB40, many more) BACK IN WINNIPEG AFTER 24 YEARS IN LONDON - ITS BEAUTIFUL. Ten albums and decades of work, but not enough in Canada. Lets get busy.

“Can I have your phone number” -Grace Jones

“I love your style” -Ray Davies

“That was tremendous.” -Cyndi Lauper (performed live with Cyndi on BBC 1 Television)

"Son of Dave: Genius. Did I say it? Genius. The most original musical artist in the blues idiom that i've ever heard since Little Walter at least." - Mendelson Joe