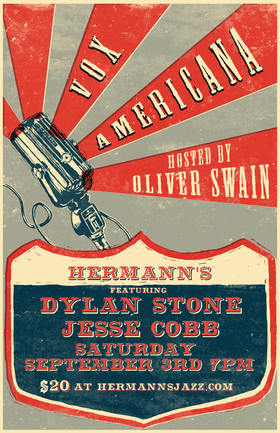 Music changes when genres collide. Merriam-Webster defines Americana music as “a genre of American music having roots in early folk and country music.” The panorama of these roots is wide, taking in country and western, Appalachian, gospel, roots-rock, folk, bluegrass, R&B, and blues. Over the past decade a new generation of musicians and audiences have embraced Americana music as a post genre catch-all for the great songwriting and singing styles of North America. Oliver Swain hosts Victoria's first Americana Music night featuring two musicians who could define the genre Dylan Stone and Jesse Cobb. Original songs, traditional Folk, Bluegrass, Oldtime and Blues will be on the set list along with some carefully selected covers of artists like John Prine, Chris Stapleton, James Taylor and Lucinda Williams.

After founding The Bills in Victoria, Oliver Swain spent many of his formative years travelling the southern United States, eventually settling in Breaux Bridge Louisiana and joining Cajun and Western Swing group The Red Stick Ramblers. Since then he went on to found Outlaw Social with Pharis Romero and has released two critically acclaimed and award winning solo albums.
Jesse Cobb's musical life started around the age of 11 in the small rural community of Dairyland, Wisconsin. Inspired and motivated by two older brothers and a father that played banjo, fiddle, and guitar, Jesse went on to be one of Nashville's top Mandolin players eventually founding the grammy nominated Bluegrass band The Infamous Stringdusters.

Dylan Stone was nominated in 2020 for a Canadian Folk Music Award (New/Emerging Group) with his band The Unfaithful Servants. With his rock & roll outfit, The Dylan Stone Band, he has warmed up stages for the likes of Keith Urban, EVERLAST and Alejandro Escovedo. An interesting and storied career has led him to perform on stage with musical heavies including Robert Randolf and Colin James. An honest musician who plays and sings from the heart, Dylan is a restless songwriter who is constantly pursuing new songs, sounds and collaborations. Stone has lived and toured across Canada and toured the West Coast extensively. He is a modern-day troubadour who is most at home on stage with guitar in hand.
© 2022 Arts On View Society