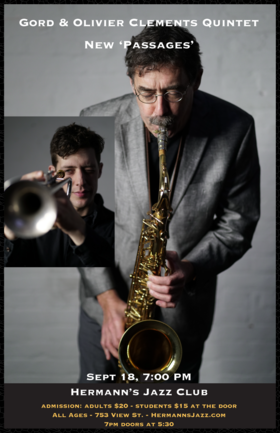 After over 40 years on the scene in Victoria, Gord Clements has established himself as one of Victoria’s most prolific multi-instrumentalists. ‘Passages’ was his 7th recording on the international market and last year he released a new classical recording of J.S. Bach’s 4th Solo Cello Suite on bass clarinet.

Olivier Clements has spent the last 8 years collaborating with some of Canada’s best-known indie artists. While extensively touring North America and Europe with Aidan Knight, he has also performed with Dan Mangan, Louis-Jean Cormier, Miss Emily Brown, and recorded for Said the Whale, Northcote, Towers and Trees, and Party on High Street.
© 2022 Arts On View Society