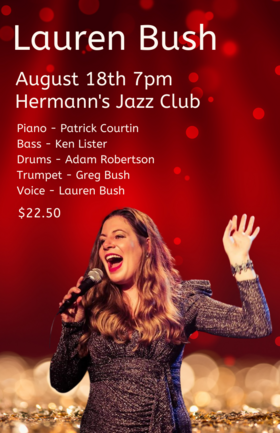 Thu. August 18th 7:00 - 9:00 doors at 5:30 (All Ages)
Livestream + In Person $22.50  Buy Tickets Online
>> Purchase In-Person Tickets
>> Donate to Support the livestream
Originally from Vancouver Island, Lauren Bush has been based in London, UK for the past 10 years. Since moving over there, she's recorded 2 albums, been a finalist in the Sarah Vaughan International Jazz Vocal Competition and toured all over Europe with her band. She's back for a visit and playing arrangements from her previous albums with some of her favourite musicians, as well as some never before heard music to be released on her upcoming third album. An evening not to be missed!