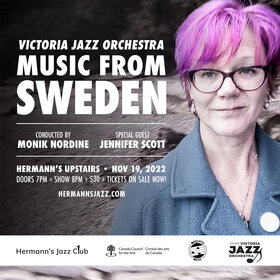 Sat. November 19th 8:00 - 11:00 doors at 7:00
$35 advance / $40 door including fees/taxes On sale now  Buy Tickets Online
>> Purchase In-Person Tickets
Presented by: Hermann's Upstairs, Canada Council for the Arts
This special concert is a coming together of several artists and music from Canada to Sweden. The Victoria Jazz Orchestra will be performing a program of new music inspired by the mentorship of composer Ann-Sofi Söderquist in Stockholm, Sweden and written by Monik Nordine. Joining them for this is vocalist Jennifer Scott.

The Victoria Jazz Orchestra was formed in May, 2013 and performed regularly at Hermann’s Jazz Club for a number of years. In 2017 the orchestra was featured at the Victoria International Jazz Festival and in 2018 at the Nanaimo International Jazz Festival along with The Mingus Dynasty Band and Dave Kikosky. You can hear the VJO with Dave Kikosky on Bandcamp:

Jennifer Scott is a Vancouver-born vocalist and jazz pianist specializing in jazz, blues and world music. Jennifer is considered one of the most important jazz artists working in Canada and the United States today. From sold-out concerts in San Francisco, LA, and Seattle to exclusive local club performances, Jennifer's performance experiences have ... more info

“… solid performance and writing chops.” – Downbeat Magazine Saxophonist Monik Nordine has received several prestigious arts awards including a Juno Award nomination for her work on the album Cruel Yet Fair (1997) with John Korsrud’s Hard Rubber Orchestra and has toured with Hugh Fraser’s band VEJI. Having shared the stage with m... more info
Videos:

Puttin' on the Ritz