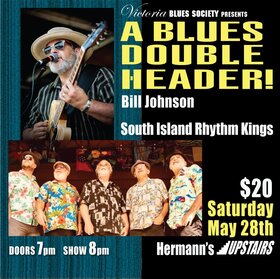 Sat. May 28th 8:00 doors at 7:00 (No Minors)
$20 ($25.31 at checkout)  Buy Tickets Online
>> Purchase In-Person Tickets
Bill Johnson
Bill Johnson has been playing blues for 40 years. A master guitarist, musician, and vocalist, Bill has developed his own brand of laid-back, soul-thumping blues. Whether on his own, or performing with his band, his unique style and beautiful tone reveal a rare passion for the blues. A Juno nomination in 2012, and four Maple Blues award nominations have earned him a place among Canada’s best blues artists.

South Island Rhythm Kings
At the nucleus of the South Island Rhythm Kings is the Father/Son team of Lazy Mike Mallon on vocals and harmonica, and Carson Mallon on guitar and vocals, along with Dan Dube on piano, Casey Ryder on bass guitar and Nick Dokter on the drums. The band delivers classic, traditional blues. And from these traditions, the South Island Rhythm Kings draw their inspiration. In a modern world or digital excess, this is a group of musicians who present a repertoire of old school, real deal blues music. You will not find any meaningless virtuousity, just the pure expression of blues being reared on the stretch of Highway 1 from Nanaimo to Victoria. This is the blues on Vancouver Island.
© 2022 Arts On View Society