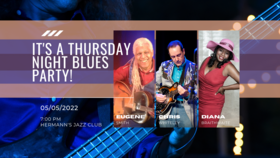 Thu. May 5th 2022 7:00 - 9:00 doors at 5:30 (All Ages)
$30
Online sales are closed now but tickets will still be available at the door.
It's A Thursday Night Blues Party! With Diana Braithwaite, Chris Whiteley and special guest Eugene Smith

Back again by popular demand! Join these multi-blues award winners deemed "Masters of Old School Blues" by Blues Revue Magazine for a fun filled Thursday night of blues! With an all star band: Jan Randall on Piano, Jack Lavin on bass, and Ross Hall on Drums, this show will feature more songs from their exciting collection of classic and original blues favourites. Highlighted by Diana's authentic blues vocal sound and legendary multi-instrumentalist Chris Whiteley on slide guitar, harmonica and trumpet, this promises to be a memorable night of great music. Don't miss this dynamic "real deal" duo before they head back east.
Special guest - the legendary vocalist Eugene Smith! A rare Victoria performance by this unique entertaining singer who has shared the stage with BB King, Gordon Lightfoot, Bo Diddley and K.D. Lang to name just a few! Throughout his lengthy career, Eugene toured with 'Rompin' Ronnie Hawkins to Memphis, Alabama and many southern states and also led his own successful band for many years.

Critic's Pick List! "The duo of singer Diana Braithwaite and multi-instrumentalist Chris Whiteley is a two-pronged threat, with both veterans bringing something special to the table. With multiple Juno Award nominations and Maple Blues Award wins as a unit, they are an extremely esteemed duo in the blues genre...band that includes Jack Lavin on bass, Ross Hall on drums, and Jan Randall on piano, expect great things to happen. This will be a party with a capital P."