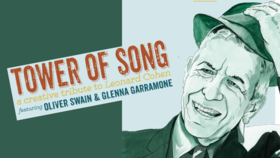 "I said to Hank Williams, how lonely does it get?
Hank Williams hasn't answered yet
But I hear him coughing all night long
A hundred floors above me, in the Tower of Song."

When Leonard Cohen sang these words, the Tower of Song was a metaphor for the inspiration that flows between songwriters, each toiling away on their own, but connected by their shared craft. Moved by this concept, celebrated BC singer-songwriters Oliver Swain and Glenna Garramone collaborated to produce a project that is a dialogue through song and a tribute to the legendary songwriter. Re-imagining both rare and classic works of Cohen, the duo have crafted a sound that resonates with both longtime Cohen fans and a younger audience.

Oliver Swain, a Juno and WCMA nominated Americana and Folk-Noir musician from Victoria BC spent a dozen years in some of North Americas most loved roots bands(Outlaw Social, The Duhks, The Bills) before releasing 'In a BIG MACHINE' in 2011 to rave reviews “Oliver Swain's brilliant vocals and genre-agnostic style make 'In a BIG MACHINE' one of the... more info

Glenna Garramone is a singer-songwriter and multi-instrumentalist based in Victoria, BC, Canada, equally at home as a solo artist and in collaboration with a wide range of performers. 2016 highlights include mainstage performances at Telluride Bluegrass Festival, the Vancouver Folk Festival, and Rifflandia, as a member of the band Shane Koyczan an... more info
© 2021 Hermann's Jazz Club