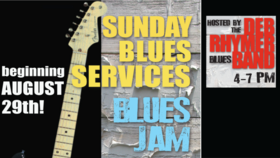 Sun. August 29th 2021 4:00pm - 7:00pm (All Ages)
Sorry, this event is now sold out
FREE. Limited capacity of 75, first come first seated!
The Deb Rhymer Blues Band is back at it with her Sunday Blues Services Blues Jam!!
We are so happy to be hosting the Sunday Blues Services.
The Deb Rhymer Band features Kelly Fawcett on guitar, Phil Albert on bass, Andy Graffiti on drums and Deb Rhymer on vocals. Deb and the band have played all the clubs and pubs in the Victoria music scene as well as a number of blues events and festivals. The band has hosted an afternoon blues jam, every Sunday for the last 9 years which was held at The Hideaway Restaurant in the Tally Ho Hotel on Douglas from 3:30-7. Their first self titled album "The Deb Rhymer Band" has received a lot of airplay including the CBC Saturday Night Blues Show with Holger Peterson - From Texas to Chicago, to Louisiana and the blues delta, this band covers it all....
© 2021 Hermann's Jazz Club