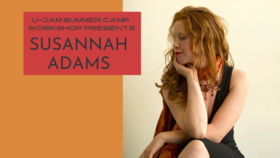 Tue. August 10th 2021 7:00pm - 9:00pm doors at 5:30pm (All Ages)
Livestream + In Person $16.07
Reservations close 4 hours prior to show time.
>> Donate to Support the livestream
Susannah Adams will present a 75 minute set, followed by a jam with UJAM summer campers!
UJAM is a week-long jazz music summer camp for amateurs and musicians of all ages. Hermann's UJAM shows give the campers an opportunity to jam with a headliner band.

More about Susannah Adams:
Vocalist Susannah Adams is widely recognised as a dynamic and versatile musician who is consistent in developing her capacity within the jazz genre. Adams has worked with some of Canada’s finest musicians, including Miles Black, Oliver Gannon, Daniel Lapp, Joby Baker, David Restivo and Phil Dwyer.

Adams is fast becoming one of Vancouver Island’s most celebrated vocalists. Her flair for adventurous stylings has earned her great acclaim. Dr. Patrick Boyle, Associate Professor of Jazz Studies at the University of Victoria, admires Adams’ bold and unique expression. “She is a consummate professional, constantly honing her craft. More than most singers, Susannah spends a great deal of time cultivating her original voice as an improviser.”

You can donate directly to the musicians and this venue at ArtsOnView.ca/Donate
© 2021 Hermann's Jazz Club