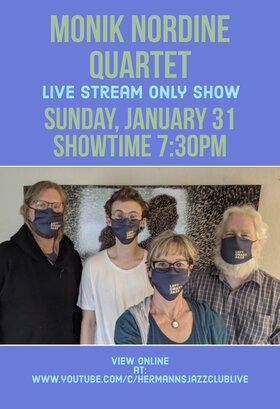 Sun. January 31st 2021 7:30pm - 9:00pm (All Ages)
Livestream By Donation
>> Donate to Support the livestream
Saxophonist Monik Nordine has received several prestigious arts awards including a Juno Award nomination for her work on the album Cruel Yet Fair (1997) with John Korsrud’s Hard Rubber Orchestra and has toured with Hugh Fraser’s band VEJI. Joined by Rob Cheramy on guitar, Phill Albert on bass and Miles Fuller on drums, The Monik Nordine Quartet is heavily invested in Canadiana from Sonny Greenwich to Oscar Peterson and band originals, and each member is a composer in their own right. Nordine and Cheramy have worked together for many years and Phill Albert recorded with her on the album Departures (2010). Miles Fuller is new to the scene and a fresh voice on jazz drums and will have a long career starting in Victoria, BC

Juno award nominated saxophonist Monik Nordine is a freelance musician and composer in the jazz genre and has been working as a musician for 30 years. She directs The Victoria Jazz Orchestra and has performed with The Hard Rubber Orchestra, Ian McDougall, Rob McConnell, Hugh Fraser and VEJI, Guido Basso, Michael Buble, and the Victoria Symphony Orchestra and more. http://www.moniknordine.ca
© 2022 Arts On View Society