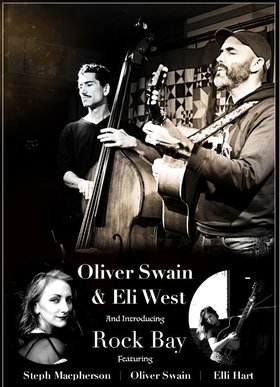 Fri. November 1st 2019 7:30pm - 10:30pm doors at 5:30pm (All Ages)
While Oliver Swain is well known to victoria audiences, Eli West has been toiling away south of the border, developing a style and creativity that oozes understated talent. And his work has not gone unnoticed. A busy touring artist with stops from North Carolina to Japan this summer, Eli has also been tapped by BC's top Bluegrass musician John Reischman and now regularly appears with The Jaybirds and in a duo with John that recently returned from a tour of Australia.

Rock Bay Featuring Oliver Swain, Elli Hart & Steph Macpherson
Three of Victoria's favorite songwriters have joined forces in Rock Bay. Elli Hart is a Canadian artist who blends gorgeous melodies over gritty guitar tones. Known for her soulful voice and ability to dig into her guitar.
Award winning Steph Macpherson has a a knack for honest words and powerful lyricism. She has been nominated for a Western Canadian Music Award for Songwriter of the Year and recognized by SOCAN as a featured artist.

When Islands Folk Festival Artistic Director Kelly Nakatsuka brought Oliver Swain and Eli West together for the first time on the Tzouhalem stage in 2018, a lively musical conversation lit up. They shared their perspectives on traditional Appalachian and Mississippi Delta music and indulged in some tangential modern songwriting and performance styles. Like any good conversation there was plenty of good humour and a genuine curiosity in the other. Their set brought the house down and moments afterwards, while chatting backstage 'Across the Haro Strait' was born. This short tour and recording session might just be the shape of things to come in westcoast Americana.

More praise for Eli West...
‘Making music the world needs’ – Tim O’Brien
‘West is an artist overflowing with ideas and music’ – Green Man Review
‘Eli West is an exceptional singer, guitar player and musician, really deep stuff’ – Martin Simpson
"I had such a wonderful time playing music with Eli West and am so happy our first notes together are documented here on this beautiful recording.” - Bill Frisell

Award winning roots artist Oliver Swain has as been a celebrated musician for years, held in high regard in acoustic and folk music styles for both his astonishing instrumental and vocal abilities, though he seldom gives the genre a fully traditional treatment. Oliver Swain strays towards the whimsical, the spiritual, and the socially conscious side of what he likes to refer to as "chamber folk odyssey", and it's these beguiling and provocative elements that make him unique as an artist and songwriter. Devon Leger even called him "The Zen Rock Garden of old time music" No Depression
"This is genre defying at it's best...beautifully played and performed, each song a mini masterpiece" Paul Jackson, Fatea magazine UK
"Since I first discovered him, Oliver Swain has been one of my very Favorite artists, especially in a live setting" Tamara Kater, Director at Folk Music Canada.

**To make your Dinner Reservation after purchasing your tickets please email info@hermannsjazz.com
© 2022 Arts On View Society