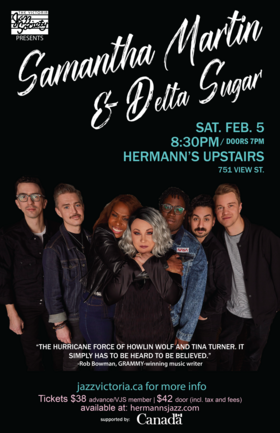 Sat. February 5th 20:30 - 22:30 doors at 19:00 (No Minors)
$38 advance/VJS members/students | $42 door On sale now  Buy Tickets Online
Presented by: Victoria Jazz Society
The Canadian jack-of-all-genres/JUNO-nominated band, Samantha Martin & Delta Sugar, has been raking in rave reviews. Though categorized technically as blues music, Samantha Martin & Delta Sugar transcend typical notions of genre, drawing influences from gospel, soul, pop and rock from many musical eras. With the worldwide pandemic causing utter havoc upon the careers of many musicians, they elected to use their time off the road to record, mix and master their latest tour-de-force, the astonishingly powerful, funky and deeply soulful The Reckless One. The follow up to 2018’s JUNO-nominated Run To Me, The Reckless One represents another massive step forward for Samantha Martin as a songwriter, singer, arranger and band leader. The Reckless One was also nominated for Blues Album of the Year and the 2020 JUNO Awards, several Maple Blues Awards. The band was also nominated as International Artist of The Year at the UK Blues Awards, and most recently, nominated for another Maple Blues Award for 2021.

This remarkable 10-member band recalls the best of the soul and blues sounds of Stax Records and such contemporary artists as Leon Bridges, Sharon Jones, and Lee Fields. A dynamic front woman, Martin (who has been nominated for 13 Maple Blues Awards to date) possesses an exquisite voice that is rich with emotion and brings out the nuances of her gut-wrenching lyrics. The chemistry of Delta Sugar, however, is not the work of a single talent. In combination with her co-vocalists, Sherie Marshall and Mwansa Mwansa, and a powerhouse band, the blend Delta Sugar produces is pure, unadulterated gospel-tinged, neuron-tingling magic where the sum is even richer than the already soul-melting parts. They last played in Victoria in February 2020, and now return in full force with their latest album in a thrilling performance at Hermann’s Upstairs!
© 2022 Hermann's Jazz Club