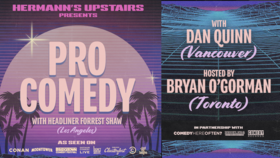 He's co-host of the I Don't Know About That podcast with Jim Jefferies and his albums Muster Grizzly and the Bella EP can regularly be heard on SiriusXM.

Forrest has written for the Jim Jefferies Show, The Conor Moore Show, and the award-winning series, Labor Days. As an actor, he's appeared on FX, Comedy Central, and Animal Planet.

ARRIVE EARLY FOR THE BEST SEATING OPTIONS!
Advance Tickets Strongly Recommended.
Tickets at the Door are Not Guaranteed to Be Available.
753 View St., Victoria, BC

LARGE PARTIES ACCOMMODATED! HOST YOUR BIRTHDAY PARTY, STAFF PARTY, OR OTHER CELEBRATION WITH US. Message us here.
This is a 19+ Event | Covid-19 protocols and BC Public Health Order in effect | ID and Vaccination Required