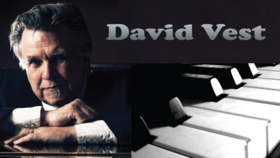 Sat. August 21st 2021 7:00pm - 9:00pm doors at 5:30pm (All Ages)
Livestream + In Person $25
Reservations close 4 hours prior to show time.
>> Donate to Support the livestream
For this show, David Vest and his band will feature "Blues from Alabama." From W.C. Handy and Pinetop Smith to Erskine Hawkins and Dinah Washington, from Nat King Cole to Big Mama Thornton, Wilson Pickett, Johnny Shines and James Harman, Alabama has produced way more than its share of great blues (and jazz). And who better to take us on a tour of this music than "the original boogie-woogie starchild," David Vest, a five-time Maple Blues Award winner and one of the foremost living examples of Alabama blues.

David was born in Alabama (raised in Huntsville and Birmingham) and toured all across the Gulf Coast while still in his teens. Although he is now a longtime Victoria resident, his roots run deep. Who else has had his songs recorded by both Downchild and Tammy Wynette? He has performed onstage with Big Joe Turner, Bo Diddley, Miss Lavelle White, Jimmy T99 Nelson, Carey Bell, Hubert Sumlin and many other blues legends. It was T99 who said, "I could go all-around the world and I'd never find another piano player like David Vest."

His band features Tom Bowler on guitar, Ryan Tandy on bass, and Damian Graham on drums.

You can donate directly to the musicians and this venue at ArtsOnView.ca/Donate
© 2022 Arts On View Society