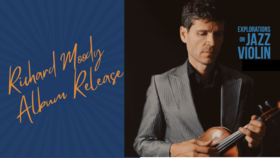 Fri. August 20th 2021 7:00pm - 9:30pm doors at 5:30pm (All Ages)
Livestream + In Person $25
Reservations close 4 hours prior to show time.
>> Donate to Support the livestream
Join Richard to celebrate the release of his new recording on Vinyl, Cd, and stream. He will be joined by the astoundingly great players from the recording: Joey Smith on bass, Brent Jarvis on piano, and Kelby MacNayr. The show will feature some originals from Richard, as well as some great classic standards, such as Georgia, Moonglow, and Body and Soul.

The violin owns only a small patch in the fertile field of jazz improvisation, but Richard's take is unique and melodic, a nod to the greats like Grappelli and Venuti, and the introduction of his own voice on the instrument, in the jazz idiom.
© 2021 Hermann's Jazz Club