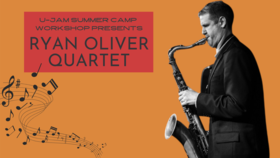 UJAM is a week-long jazz music summer camp for amateurs and musicians of all ages. Hermann's UJAM shows give the campers an opportunity to jam with a headliner band.

More about Ryan Oliver:
A Juno-nominated, Victoria-based saxophonist, Ryan Oliver honed his craft on Canada’s west coast before moving to Amsterdam, Toronto and New York. Since returning to Vancouver Island, he has maintained a busy schedule as one of Canada’s most in-demand saxophonists. His most recent recording, “Strive” features legendary jazz drummer Victor Lewis. Oliver has toured Canada, India, Australia, New Zealand, South America, Europe and the United States with the legendary eclectic jazz group, The Shuffle Demons. He is also a member of Juno award winning blues/rock performer Derek Miller’s group.

You can donate directly to the musicians and this venue at ArtsOnView.ca/Donate
To watch: https://www.youtube.com/c/HermannsJazzClubLive/videos
© 2022 Arts On View Society